Every episode of Aajo Jinhe Khedna ends with the Pithoo Garam Mukabala. This game has the power to turn the tables on the leading team. Check it out! 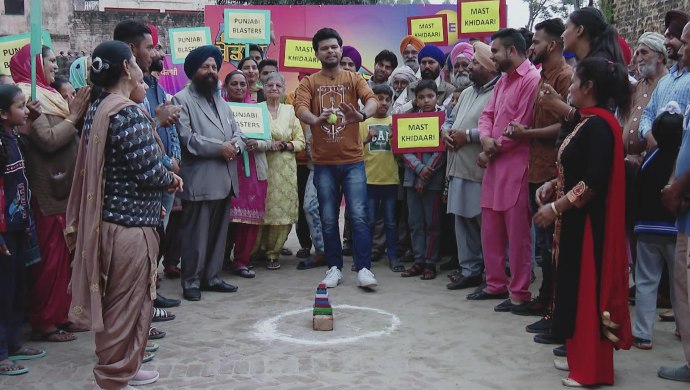 The Zee Punjabi TV show Aajo Jinhe Khedna has the power to take us back and bring back the innocent fun and memories of our childhood. Host Karan Kumar carries the trope of ultimate entertainment and packages in all the dhamaal and thrill in a 30-minute episode.

In the pind of Mohali, Karan divides the enthusiastic people of Mohali into two teams, Ranukiye Da Gang and Befikere Unit. First, both teams fight it out in Langdi Laat and tie on 40 points. Later with Gulli Danda, Befikre jumps up to 80 points whereas Raunkiye Da Gang earns 60 points. Then after an interesting game of Hopscotch, Befikre ends up with 115 points and Raunkiye are close on their heels with 110 points. Now in Pithoo Garam Mukabala, Befikre performs poorly and scores a zero. Raunkiye Da Gang performs exceptionally well, and in the end, Befikre, who were leading throughout the episode earn 115 points in all and Raunkiye Da Gang win the game by scoring 150 points.

The Stiff Competition in Moga

After Mohali, we head to Moga. Karan has a blast with the people of Moga. He makes two teams, Raunkiye Avengers and Rustom-E-Punjab. After engaging games of Kalli Chota and Bandar Killa, Raunkiye Avengers score 65, whereas Rustom-E-Punjab are five points ahead of Raunkiye with 70 points. The finale Pithoo Garam Mukabla is really challenging for both teams. However, Raunkiye fails to score anything in the game and their total remains the same. On the other hand, Team Rustom puts up an interesting game and they end up winning the competition with a total of 150 points.

The Magical School Kids of Jalandhar

Masti di toli heads to CT Public School of Jalandhar and there we get to see josh-e-jawani and intellect of the future of our country. Karan makes two teams, Proud Khidari Unit and Bamb Gang. After the nail-biting games of Langdi Laat and Stapoo, Team Khidari stands at 45 and Bamb Gang are at 50 points. After the wild card entry, Pithoo Garma Mukabla starts and after unpredictable game, Team Khidari scores 55, whereas Bamb Gang wins the game by scoring 70 points.

The Twisted Game in Rattewal

Karan puts up an entertaining game with the college students of MBBGGG, Rattewal. Karan starts this competition by making two teams, Team Jaanbaaz and Befikre Unit. After Rumaal Chukna and Pairs, both teams are on 40 points. Now the finale will decide the fate of this game, thus Pithoo Garam Mukabala becomes really important for both teams. After a stirring game, team Jaanbaaz scores 55 and Befikre Unit ends up winning the round by scoring 60.

So these were some of the most interesting Pithoo Garam Mukabala games where you can’t predict the winners. Which episode is your favourite one? Comment below with your views.

Aajo Jinhe Khedna: 5 Best Of Bante Moments That Will Take You Back In Time

Get Live Updates on Coronavirus Outbreak on ZEE5 News

Get To Unknown Facts About Lifestyle, Diet In Jee Aayan Nu Only On ZEE5!