What happens when you have famous Gurdas Maan Saab songs recreated in front of the master himself? Read on to find out! 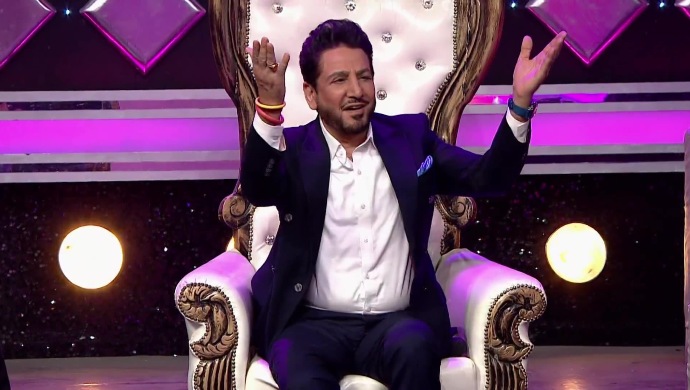 The Punjabi TV show Sa Re Ga Ma Pa has proven the fact that in Punjab, there is a singer in every other house. With superbly talented contestants, one can imagine how difficult it would be for the judges to rank them. Nonetheless, Jaidev Kumar, Jazzy B and Sonu Kakkar are doing their best. In one of the episodes, the contestants sang the classical hits of singer Gurdas Maan.

The show’s mentor and the icon himself, Maan has such a presence that as soon he appears on stage, there is magic in the air. In this episode, when he came on stage, he brought along the winner’s trophy. Now it is the turn of the contestants to take on another challenge, where they have to sing Maan’s classical hits — in front of the idol himself.

At first, Sur Sagar sang Ki Khateya from the album Heer. By the end of the song, everyone from the judges to Maan gave him a standing ovation. Maan went on to say that he was speechless and enjoyed the song to the core. When it came to scores, Sagar scored a perfect 30 in the first chart-buster performance of the evening.

Inderpreet Singh from Sri Mukatsar Saab sang Tut Gayi Tarak Karke from Maan’s iconic Dil Da Mamla Hai. Inderpreet managed to entertain everyone, and by the end of the song, he received humongous praise from Maan. The other judges pointed out a few errors though, and they gave him 27 out of 30.

Mehak Bamotra took the stage to sing Angootha Dil Vaali Vahite from Jigiri Yaa. Jazzy Paaji enjoyed it very much. Mehak also got blessings from Maan and secured 28 out of 30.

After Mehak, Rahul Mehra wooed the audience and judges with his voice. He sang Jogiya Ve Jogiya. Everyone was lost in his singing. After the song, Jazzy requested Maan to sing and he granted his wish. After Maan added sparks to the evening, Rahul scored 26 out of 30.

After Mehra, we had another Rahul — Rahul Rustom. He took the limelight as he sang Bas Rehan De Chhed Na from Vilaytan with utmost dedication. From Maan to Jaidev, everyone was surprisingly happy with Rustom’s singing. He also received a standing ovation from all dignitaries. Maan said he enjoyed his performance a lot and his master’s soul was reflected in Rustom. He too scored a perfect 30.

This is part one of a fabulous episode. Watch part two here. Which is your favourite singer from the show? Do let us know in the comments section below.

Watch Jee Aayan Nu get enlighten about unknown facts about health and skincare.

Get Live Updates on Coronavirus Outbreak on ZEE5 News.

Watch Aajo Jinhe Khedna To Relive Your Childhood Only On ZEE5!

4 Best Moments That Define Heer Ranjha As An Overall Entertainer